Doctor Who: The First Wave

Posted on 19 December 2011 by Cavershamragu

The Plot: Caught in the inevitable path of its own history, the TARDIS arrives on the planetoid Grace Alone, where the Doctor, Steven and Oliver expect to face their fate. What they don’t expect to find is a massacred crew – and a race of alien invaders known as the Vardans. When the Doctor is apparently killed, his companions attempt to survive against the odds. But those odds are narrowing. Their borrowed time has expired.

“The Doctor is gone – and we’re finished!”

This release definitively concludes the trilogy of Companion Chronicles by Simon Guerrier narrated by Peter Purves as astronaut Stephen Taylor and featuring new First Doctor companion Oliver Harper, played by Tom Allen. In their first adventure, The Perpetual Bond, we knew from the outset that Harper was on the run from the police but not why. This was revealed in the second story, The Cold Equations and if the revelation was hardly shocking in this day and age, it didn’t change Harper’s feeling of being on the run from the authorities for very long because the trio also discovered that they were wanted for crimes that they had yet to commit on the planetoid, ‘Grace Alone’. The Doctor, having read the files on their ‘case’, insists that they must in fact go there and face their destiny. The story begins, as did its predecessor with an action teaser, in media res, as Steven and Oliver run for their lives on the surface of the planetoid.

As Guerrier has been at pains to do in the earlier instalments, we get some honest to goodness scientific learning with this release, in the shape of a short lecture from Stephen on the history of radio waves and radio broadcasting, which is nicely integrated into the plot and is reflected thematically throughout as part of the eponymous ‘wave’. As revealed by Guerrier, the title was originally meant to be ‘on Borrowed Time’ and the phrase does turns up rather a lot, but the eventual moniker is much more satisfying. The description of the dramatic space walks undertaken by Stephen and Oliver are very effective, as is the confrontation with the apparently benevolent aliens which eventually leads to the apparent death of the Doctor. But it’s the conclusion that brings everything together and where Guerrier really plays his trump cards. 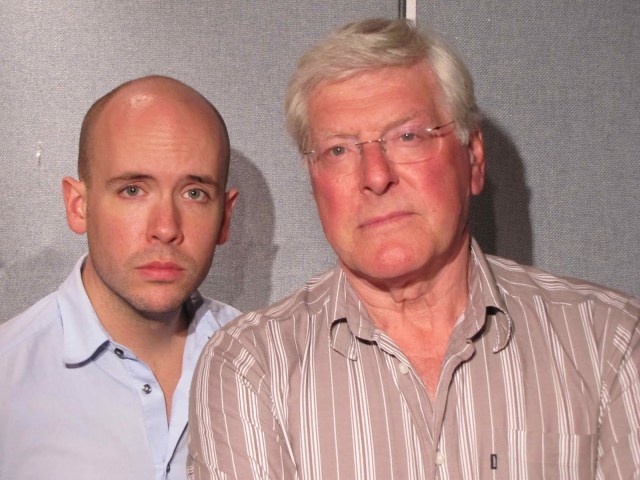 It perhaps unfortunate that one can’t really discuss the most notable aspect of Guerrier’s script as it is the conclusion. Apparently the ending was always foreseen for this release and it takes up the best part of the closing ten minutes of the story but it is well worth waiting for. It brings this mini series to a fine and moving conclusion and is certainly the best of the trilogy in terms of character development though the plots have tended to be more serviceable than inspired in this series and the time-whimey element, while nicely dovetailed into the idea of destiny that is absorbed into the conclusion, is not entirely convincing. The Doctor spends most of his time getting out of impossible temporal paradoxes – why does he believe that this is one that cannot be finessed? It’s my one and only major caveat.

Otherwise this is a highly entertaining release, with Purves and Allen both excellent (Purves performance of the first Doctor continues to be a complete delight in particular), delivering a two-part play that is thematically rich and has a powerhouse finale that is truly memorable.

This entry was posted in Big Finish, Companion Chronicles, Doctor Who, Simon Guerrier. Bookmark the permalink.