Posted on 30 December 2011 by Cavershamragu

For what I plan to be my last review for this blog, I thought it would make an interesting change of pace to review a book about audio. This is the first volume of a new guide by Richard Dinnick … Continue reading →

Posted on 20 August 2011 by Cavershamragu

“Does that make sense to you or am I just quoting Shakespeare to a bunch of baboons?” The plot: When Litefoot’s home is invaded by giant metal spheres, it seems that the end of the world is nigh. The enemy … Continue reading →

“It would be pleasant if time wasn’t always of the essence.” The plot: The New Regency Theatre is haunted and Jago, Litefoot and Leela witness the spirit of someone in a silver wheelchair floating over the stalls. This is the … Continue reading →

“Old ladies need much armour” The plot: Strange things are happening in the Naismith household. Eleanor Naismith has vanished, and her daughter Clara is found in odd circumstances… What is the link to Eleanor’s book, ‘The Man At The End … Continue reading →

A friend from the past returns to warn Jago and Litefoot of a threat to the future. Time breaks are appearing in Victorian London, but first Leela must help solve the mystery of the Wet Men – terrifying creatures that are rising from the River Thames…

Posted on 14 March 2011 by Cavershamragu 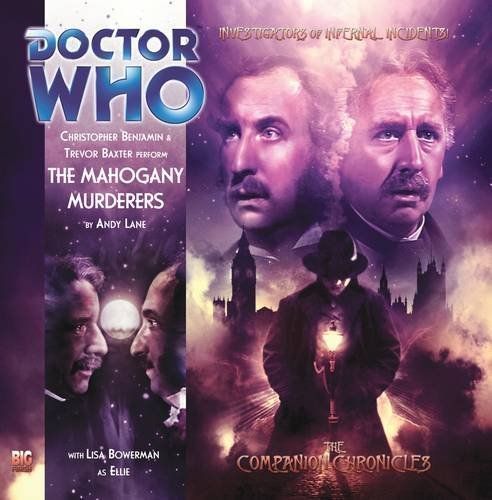 THE MAHOGANY MURDERERS
Juicy Jagoisms: “pleasing to the palette and possessing a pulchretudinous perfume”; “cracking complex conundrums”.
The plot: Who is the mysterious Dr Tulp and what is his connection to the appearance of life-size wooden mannequins in the shape of hardened criminals from the London underworld?

One of the smartest decisions the Big Finish production company ever made has been to further extend its Doctor Who audio releases by creating its range of Companion Chronicles talking books. While the main releases feature the actors who previously played the Time Lord on television, the Chronicles raison d’être is to focus on the doctors not normally represented (the first three actors having all passed away and Tom Baker having until recently refused to participate) with their adventures instead narrated by their friends and companions. This has the virtue of widening the scope of the releases both by including the other characters but more importantly by providing a welcome focus on the supporting players. The Mahogany Murderers has proved to be one of the most unexpected and most completely successful of these releases thus far. Continue reading →