Doctor Who: Peri and the Piscon Paradox

Posted on 2 April 2011 by Cavershamragu

This two-part, two-disc play by Nev Fountain just might be the best release yet from Big Finish in their Companion Chronicles range of speaking books. By their very nature they privilege narration and narrative point of view as they are Doctor Who adventures told from the perspective of his friends and associates. We are allowed therefore not only a variant perspective on the Time Lord through his several incarnations but also of those around him. What makes this release stand out is the way that it has fully embraced these aspects of the format and then tried to extend them to their limits (and perhaps beyond).

Fountain’s previous Who audios, The Kingmaker and Omega, both featured Peter Davison as the Fifth Doctor and he is once again the central focus here in another story which expands in original ways on what we think we know about our characters. To do this Fountain has deftly constructed a game of two halves which, with considerably wit and intelligence, gives us one story seen from two radically opposing viewpoints so as to deepen our understanding of the characters and also to better appreciate what is at stake for them on a much more personal level than initially we might have suspected. 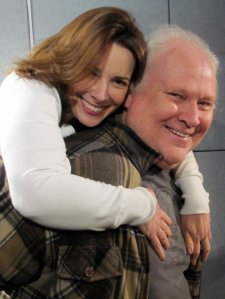 The Doctor is accompanied by our narrator Peri, played as ever by Nicola Bryant, and they arrive in LA in 2009 where after some considerable culture shock they meet two equally fishy characters: Zarl, a Piscon apparently hell bent on world destruction, and a middle aged showbiz analyst and TV celeb with a nice nose job who also appears to be an older version of Peri – except she barely remembers having travelled with the Time Lord! When more Piscons arrive to recapture Zarl things become much more complicated, especially after the older Peri reveals that she is in fact an agent battling alien incursions. This often hilarious adventure expertly mixes humour and some unexptected pathos as its eventual outcome proves ultimately to be a disheartening one for the young Peri, distressed at what she thinks she will become. Having begun in lighthearted fashion with comments about young Peri’s awful 80s fashion sense and plunging decolletage, a melancholy element is later introduced as we experience the hardness that seems to have crept into her older version. But there is a lot more to it than what the younger Peri thinks.

Fountain has worked very hard to create a series of interlocking puzzles and to say too much would unfairly spoil all that effort, especially as it is all made to  seem fairly effortless throughout with only a strange levitation and a deus-ex-machina at the end slightly marring the seamlessness of the effect. None the less for this release to work we really do need to have the second part of the story, now recounted by the older version of Peri. In fact the second half of the play reveals that what we experienced earlier was not necessarily what we thought, making events both funnier and sadder, a not inconsiderable feat.

While we get two incarnations of Peri in the story – at one point even getting into a mud fight, surely satisfying several fanboy fantasies there – we also get two Doctors with Colin Baker turning up after half time in a move paralleling the shifting and deteriorating relationship between the two Peris as we see him becoming ever more comically exasperated by his younger self’s sheer ‘niceness’. The approach is similar to that used by Michael Frayn in his classic farce Noises Off, in which the second act shows us the chaos that went on behind the scenes in the previous Act. Fountain pulls off this postmodern conceit with considerably aplomb, generating lots of laughs, some awful puns, and telling us much more about Peri than we thought we would ever know – in this he is served by finely nuanced performances from Baker and especially Bryant who differentiates between the two version of Peri with great subtlety and who manages to pack a real emotional wallop in her concluding moments in both halves of the story.

This is a splendidly ambitious release and one which, along with The Mahogany Murderers and Solitaire, represents the cream of the Companion Chronicles thus far.

3 Responses to Doctor Who: Peri and the Piscon Paradox